West Governor Heights 2 is located in Trece Martires, Cavite. This city was in fact the capital of Cavite until it was moved to Imus during the reign of Former President Ferdinand Marcos. However, many of the government offices are still located in the city of Trece Martires. For this same reason, the city has also continually flourished and there are more housing developments sprucing up in the city, which includes Solar Resources Inc.’s West Governor Heights 2.

The city got its name from the 13 martyrs of Cavite, who were charged with rebellion and executed by the Spanish colonizers in the 19th century. Hence, the city of Trece Martires is steep in history and culture. It has less than 200,000 residents as of 2015. But this number is expected to grow with the arrival of developments such as West Governor Heights 2 in the area.

The location of Trece Martires in Cavite is considered highly ideal. Geographically, it is at the center of Cavite. You can therefore easily get access to other cities in Cavite from Trece Martires. There is also a wide range of public transportation options available to add to the convenience of future homeowners in West Governor Heights 2. Your transportation options include jeepneys, buses, and tricycles.

For your lifestyle needs, West Governor Heights 2 is located within close proximity to a wide range of malls and shopping centers. If you need to replenish your supplies at home or you wish to unwind during weekends, you can head to any of the following nearby malls: SM City Trece Martires, Puregold San Agustin, L’Paseo, V-Central Mall, and Walter Mart. Meanwhile, Trece Martires Public Market is also a great place to find fresh supplies at an affordable price!

When it comes to finding good schools, Trece Martires will spoil you with options. There are plenty of great schools in the area namely Trece Martires City National High School, New Generation International School, Saint Jude Parish School, and Southville Elementary School. In terms of medical and health facilities, Trece Martires has no shortage of them either. For instance, the General Emilio Aguinaldo Memorial Hospital is one of the top medical facilities in the region. Other notable health care facilities that you can have easy access to include MV Santiago Medical Center, Gentri Medical Center and Hospital Inc., Gentri Doctors Medical Center, and Cavite Center for Mental Health.

If your family is looking for a leisure break or you simply want to exploit the many attractions near West Governor Heights 2, you will have plenty to choose from. You do not need to travel far to enjoy your leisure break as you have the following tourist attractions to choose from. There are plenty of natural attractions in Trece Martires such as Mayang Falls, Trece Martires Forest Park, Mabato Falls, and Cabuko Resort. Other popular tourist attractions that you can enjoy are as follows: Sherwood Hills, Thirteen Martyrs Tower, Amore Recreation and Leisure Park, and Palacio La Escuro. These are just a few of the things that you can explore and enjoy while living in Trece Martires. 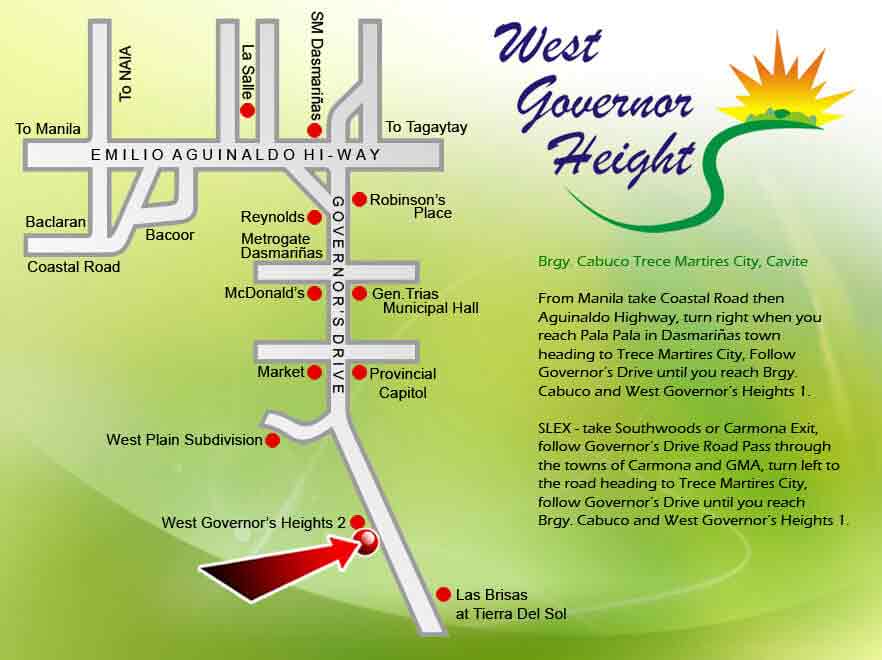